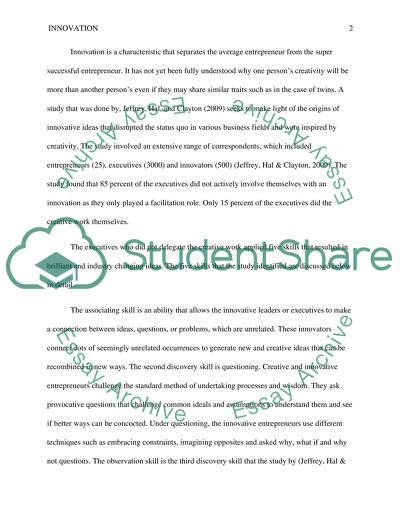 Innovation Innovation is a characteristic that separates the average entrepreneur from the super successful entrepreneur.It has not yet been fully understood why one person’s creativity will be more than another person’s even if they may share similar traits such as in the case of twins. A study that was done by, Jeffrey, Hal, and Clayton (2009) seeks to make light of the origins of innovative ideas that disrupted the status quo in various business fields and were inspired by creativity. The study involved an extensive range of correspondents, which included entrepreneurs (25), executives (3000) and innovators (500) (Jeffrey, Hal & Clayton, 2009). The study found that 85 percent of the executives did not actively involve themselves with an innovation as they only played a facilitation role. Only 15 percent of the executives did the creative work themselves.
The executives who did not delegate the creative work applied five skills that resulted in brilliant and industry changing ideas. The five skills that the study identified are discussed below in detail.
The associating skill is an ability that allows the innovative leaders or executives to make a connection between ideas, questions, or problems, which are unrelated. These innovators connect dots of seemingly unrelated occurrences to generate new and creative ideas that can be recombined in new ways. The second discovery skill is questioning. Creative and innovative entrepreneurs challenge the standard method of undertaking processes and wisdom. They ask provocative questions that challenge common ideals and assumptions to understand them and see if better ways can be concocted. Under questioning, the innovative entrepreneurs use different techniques such as embracing constraints, imagining opposites and asked why, what if and why not questions. The observation skill is the third discovery skill that the study by (Jeffrey, Hal & Clayton, 2009) found to be common with the innovative entrepreneurs was observation. The some of the creative executives came up with business ideas, which were conceived through observation. Some of the most useful observations were those made of the potential customers.
The innovators were keen on behavioral details that would give insights to a new approach to various things. By experimenting, innovative executives and entrepreneurs were able to test and fine-tune their ideas in order to understand and find new ways of doing a certain task or a certain approach. Not only is experimentation a means of coming up with new ways of approaching tasks it enables the entrepreneur to identify areas that may not work in the field as envisioned. Therefore, this study identified experimentation as the fourth discovery skill. Lastly, networking is the fifth discovery skill. This skill sets apart innovators who would be looking for a different perspective on their ideas. These entrepreneurs search for a perspective within a diversified network of individuals who possess fresh, innovative, and creative ideology (Jeffrey, Hal & Clayton, 2009). Through networking, such executives can react to get feedback, criticism, and access to platforms where they can sell themselves.
This study captured and brought to the fore the skills that are utilized extensively by the innovative entrepreneurs and executives. I think that these five skills set are responsible for various levels of innovation that are experienced in any industry. The most outstanding thing about the discovery skills is that it can be taught. Hence, the high number of executives who only facilitate innovations can learn and practice these skills to become better executives who play key roles.
References
Jeffrey, H. D., Hal, B. G., & Clayton, M. C. (2009, December). The Innovator’s DNA. Harvard Business Review. Read More

t is important to mention that cheap essay writing help has always been something modern students were looking for and were deeply interested in. However, it has been always so hard to find that many of us had to write papers for academia by ourselves and get poor
“Let this company write your important paper. I did, and it was great. I like the whole concept of the company!”

t is important to mention that cheap essay writing help has always been something modern students were looking for and were deeply interested in. However, it has been always so hard to find that many of us had to write papers for academia by ourselves and get poor
EssayOneDay provides students with professionally written essays, research papers, term papers, reviews, theses, dissertations and more. Once you use EssayOneDay for your paper writing needs, you won’t need to try any other services! We guarantee first-class work and 100% plagiarism-free papers.

READ ESSAYS BY THREE WOMEN: A FORMER CONSULTANT, AN INVESTOR & CHIEF-OF-STAFF TO A CEO
And finally, the chief of staff to the healthcare CEO spent nearly a month working on her HBS essay. She started the process by reflecting on the critical milestones in her life. She plotted out a “life map” of the key turning points in her personal journey. The result: An essay that explored the three values that HBS says it is looking for – leadership, academic excellence, and impact.