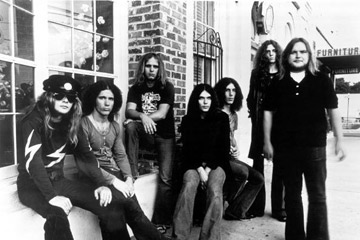 It could be because of the song itself — a nine-minute piece in the studio version, but often 14-plus minutes when Skynyrd (as the band is known to fans) performs it live, as they do to this day. It starts out as an almost-ballad, a song about a man who’s getting out of a relationship because he’s “as free as a bird,” and builds to a rousing battle between two lead guitars. It’s an epic sound consistently named one of rock’s greatest songs. On this Aol Radio list, it comes in at No. 7.
What makes people (some call them obnoxious morons, rednecks, hicks or worse) request “Freebird” at indie-rock concerts, churches, President Barack Obama’s youth inauguration ball, baseball games, even classical performances — all inappropriate places people report having heard “Freebird” hollered from the audience to musicians who aren’t likely to have the song in their repertoire?